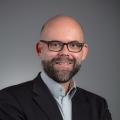 Herder Institute for Historical Research on East Central Europe
Text
Peter Haslinger has been Director of the Herder Institute for Historical Research on East Central Europe Marburg and Professor of the History of East Central Europe at the Institute of History of the Justus Liebig University Giessen and at the interdisciplinary Giessen Center for Eastern Europe (GiZo) since 2007. Previously, he was a research associate at the Collaborative Research Center "Identities and Alterities" at the University of Freiburg (1997-2001) as well as a research associate and librarian at the Collegium Carolinum in Munich (2001-2007). His research interests include the history of East Central Europe since 1848, forced migration, flight and expulsion, minority issues, nationalism and regionalism research, memory culture, musealization and historical politics, security and violence research, the spatial turn and the history of cartography as well as discourse history and the history of knowledge communication.
To the biography on the website of the Herder Institute
External Image

Why a new thematic portal on Eastern Europe?