Skip to main content
Teaserbild
Photo credit:
An "Ulm box" (built: 1970s) in front of the DZM. Donauschwäbisches Zentralmuseum, CC BY 4.0
A flat-bottomed wooden boat with a hut on top, sides painted in black and white stripes, and two very long oars at the front and back – that's an "Ulmer Schachtel" (Ulm box). This vessel, which seems curious today, was once an important means of transport on the Danube.
Text
"Ulm boxes" can still be seen traveling along the Danube today – but only for pleasure trips. Things were very different back in the days when there were no railroads and the roads were dusty and bumpy or muddy tracks. In those days, ships were a comparatively fast, reliable and cheap way for merchants and producers to transport their goods. Even if it was only in one direction: downstream. From Ulm to Vienna, the ships would be on the move along the Danube for ten to fourteen days, depending on the water level and the current.
Around 1570, the first large cargo boats were built in Ulm. These were 26 meters long and around 4 meters wide. The free imperial city of Ulm was already an important trading center in the Middle Ages, located as it was at the intersection of several trade routes. The proximity to the Danube – it is only from Ulm that the river can be navigated by ships at all – was another plus point. Initially, Ulm canvas and products produced by the Ulm wool weavers were transported, as well as dried fruit, beets, Neckar wine, Ulm playing cards and wafers. In the 19th century, merchants delivered French wines, young trees, leather, cheese, dye, flints, grass and clover seeds, wooden clocks and other "goods of Western Europe" along the Danube to 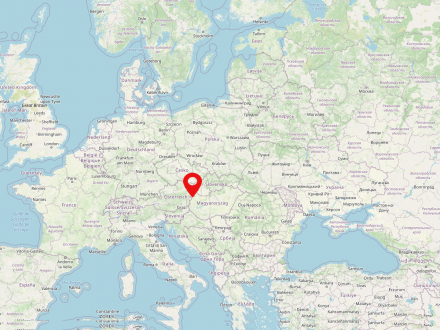 Austria-Hungary (Hungarian: Osztrák-Magyar Monarchia), also known as Imperial and Royal Hungary Monarchy, was a historical state in Central and Southeastern Europe that existed from 1867 to 1918.

Österreich-Ungarn in the Online Encyclopedia of the Culture and History of the Germans in Eastern Europe (German)
, 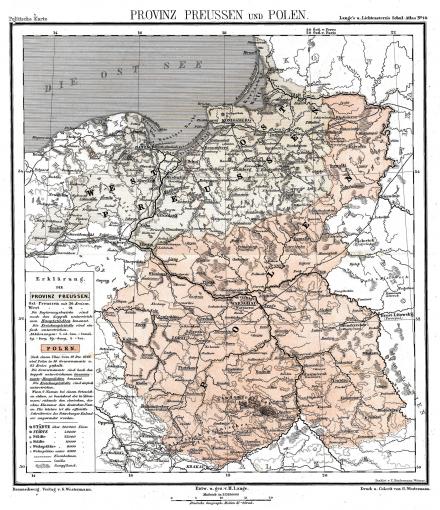 Congress Poland is the name given to the Kingdom of Poland, which was under Russian suzerainty from 1815 to 1916. After the three partitions and the final dissolution of the old noble Republic of Poland-Lithuania (1772, 1793, 1795), no Polish state had existed until the Napoleonic satellite state of the Duchy of Warsaw was established in 1807-1815. During the Congress of Vienna (1815) a Polish kingdom was reestablished. However, the Polish king was the Russian tsar and emperor in personal union.

Subsequently, there were several unsuccessful uprisings of the Polish population and elite against the Russian overlordship (e.g. November Uprising 1830/1831, January Uprising 1863/1864), which, however, only led to increasing repression, massive waves of emigration and flight (Great Emigration/Wielka Emigracja) and finally to the also administrative incorporation into the Russian state.

The picture shows a map from a school atlas published in Brunswick in 1871. Highlighted are the Prussian province of Prussia and (pale red) Congress Poland (CC 1.0).

The Russian Empire (also Russian Empire or Empire of Russia) was a state that existed from 1721 to 1917 in Eastern Europe, Central Asia and North America. The country was the largest contiguous empire in modern history in the mid-19th century. It was dissolved after the February Revolution in 1917. The state was regarded as autocratically ruled and was inhabited by about 181 million people. 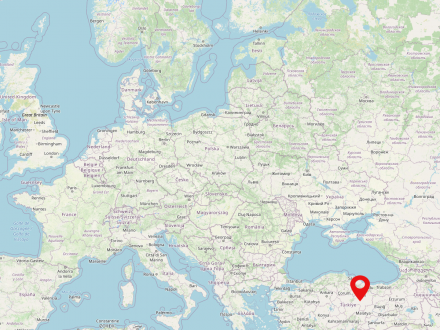 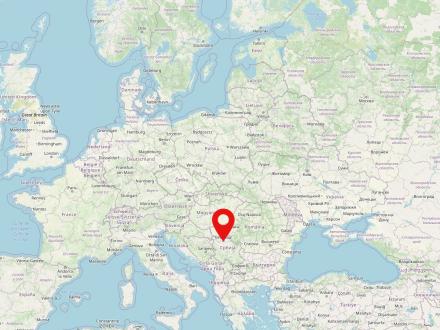 Belgrade is today the capital of Serbia and has over 1.3 million inhabitants. The city is located at the mouth of the Sava River, where it flows into the Danube on the border between the Pannonian Plain and the Balkan region. Therefore, Belgrade and its predecessor settlements have always played a strategically important role as a border fortress and an intersection of army and trade routes. Formerly called Greek Belgrade, the city was repeatedly fought over by the Bulgarian and Byzantine Empires and Hungary from the 9th to the 13th centuries. In 1284 Belgrade was ceded to the Serbian king Dragutin, but in 1427 it went back to Hungary. Under Hungarian rule, the city managed to defend itself for a long time against the Ottomans, who nevertheless captured it in 1521. At the end of the 17th and in the 18th century, it was fought over by Habsburgs and Ottomans. At the beginning of the 19th century, the Serbian population revolted against the Ottomans for the first time. In 1839 Belgrade became the capital of the Principality of Serbia, which had been autonomous since 1830 but was still under the suzerainty of the Sultan. After ethnic conflicts between Serbs and Turks, the Ottomans left the city in 1867; as a result, mosques and other Ottoman buildings were demolished. When Serbia gained independence at the Congress of Berlin in 1878, Belgrade became the capital of the state. It was also the capital of the Kingdom of Serbs, Croats and Slovenes proclaimed in 1918 (from 1929 the Kingdom of Yugoslavia). Urban planning was now oriented towards the West and Belgrade acquired the face of a European metropolis. In 1941 the Wehrmacht bombed and occupied the city. Many of the approximately 10,000 to 12,000 Jews living there were deported to camps and murdered. In 1944, the Yugoslav "People's Liberation Army" under Josip Broz Tito captured Belgrade, which subsequently became an internationally important cultural, economic and political center as the capital of the "Federal People's Republic of Yugoslavia" in 1945. In 1961, the Non-Aligned Movement was founded there. When Yugoslavia disintegrated as a result of the post-Yugoslav wars, Belgrade remained the capital of the rump state that consisted only of Serbia and Montenegro. During the Kosovo war of 1998-1999, the city was bombed by NATO.

Beograd in the Online Encyclopedia of the Culture and History of the Germans in Eastern Europe (German)Beograd at Google Maps
. At their destination, the ships were sold to the highest bidders, dismantled and the wood used elsewhere. The shipmen returned to Ulm by land. Now not only goods were transported, but above all people. The reasons for this boom in Ulm shipping were the Turkish Wars and the Habsburg settlement policy: first, soldiers from Swabia were transported to Vienna to support the Habsburgs in their fight against the Ottomans. Later, the "Ulm box" became a migration vehicle for Hungarian emigrants.
Over the course of the 18th century, thousands of colonists came to Ulm from the southwestern parts of the empire in order to travel from here by ship via Vienna to Hungary. On behalf of the Habsburg emperors, recruiters sought craftsmen and peasant families who wanted to start a new life in the Kingdom of Hungary. They were lured with privileges and the prospect of being free peasants and no longer serfs. Most of the settlers came to Hungary via the Danube, simply because it was the cheapest means of transportation. The stories of these emigrants and their descendants is told by the Danube Swabian Central Museum.
Text 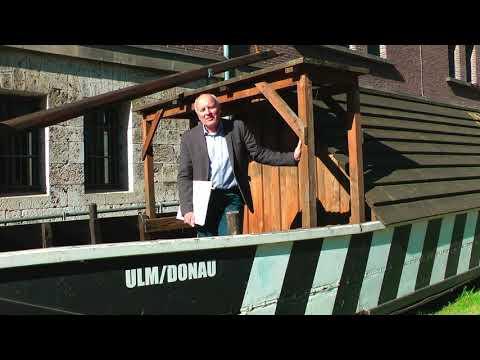 The director of the Danube Swabian Central Museum Christian Glass about the 'Ulm box', which can be seen in front of his museum.
External Image