Skip to main content
Teaserbild
Photo credit:
A historical bag of the "Staesz-Pfefferkuchengewürz" with the single spices.. Free access - no reuse

Our newsletter keeps you informed about new content in the portal and the news from the Copernico editorial team.
Subscribe to the newsletter now
The name alone is evocative of family traditions. It carries the promise of delicious cakes and biscuits, particularly in the run-up to Christmas.
Text
Around the beginning of the 20th century, the spice blends Staesz pfefferkuchengewürz (Staesz pfefferkuchen spices) and Hayma neunerlei (Hayma nine-spice blend) became essential ingredients for pfefferkuchen (a kind of gingerbread, better known in English-speaking countries with the Western German word, lebkuchen) in 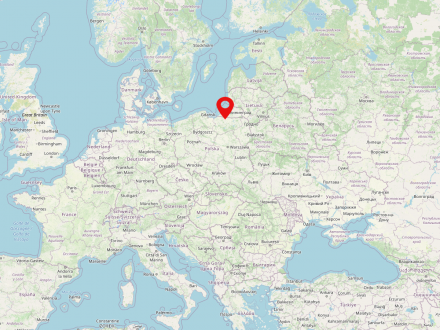 East Prussia is the name of the former most eastern Prussian province, which existed until 1945 and whose extent (regardless of historically slightly changing border courses) roughly corresponds to the historical landscape of Prussia. The name was first used in the second half of the 18th century, when, in addition to the Duchy of Prussia with its capital Königsberg, which had been promoted to a kingdom in 1701, other previously Polish territories in the west (for example, the so-called Prussia Royal Share with Warmia and Pomerania) were added to Brandenburg-Prussia and formed the new province of West Prussia.
Nowadays, the territory of the former Prussian province belongs mainly to Russia (Kaliningrad Oblast) and Poland (Warmia-Masuria Voivodeship). The former so-called Memelland (also Memelgebiet, lit. Klaipėdos kraštas) first became part of Lithuania in 1920 and again from 1945. 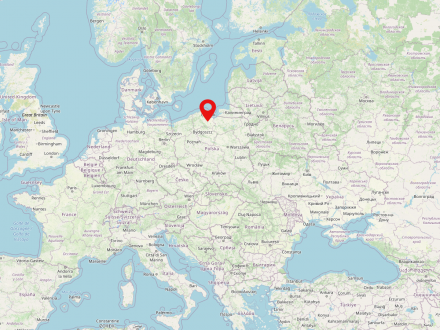 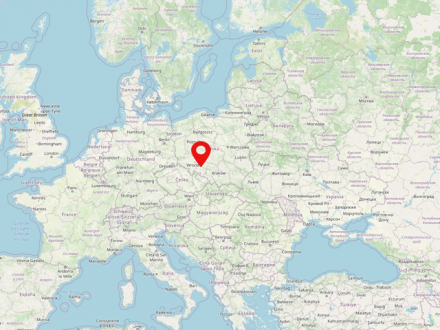 Schlesien in the Online Encyclopedia of the Culture and History of the Germans in Eastern Europe (German)Schlesien at Google Maps
. The two products were in competition for decades. This article (and a book published by the author in the summer of 2022) will attempt to place the origins of the first blend and its “inventor” in their historical context. It will also try to shed light on why it was a chemist who developed this successful business idea.
In May 1912, in 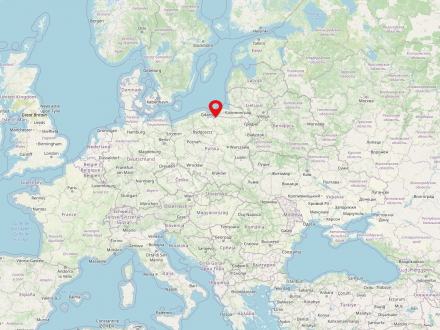 The city of Elbląg (historically Elbing) is located in the northern Polish Warmian-Masurian Voivodeship, just a few kilometers south of the Vistula Lagoon and around 50 kilometers southeast of Gdansk. In the Middle Ages, Elbląg was one of the leading Hanseatic cities and one of the headquarters of the Teutonic Order. In the early modern period, Elbing was predominantly under Polish sovereignty as part of the so-called "Royal Prussia" oder "Polish Prussia". As a result of the First Partition of Poland in 1772 the city came to the newly founded Prussian province of West Prussia, in 1945 to the then People's Republic of Poland.

Elbląg in the Online Encyclopedia of the Culture and History of the Germans in Eastern Europe (German)Elbląg at Google Maps
, the old Hanseatic city and former seat of the Teutonic Order, Robert May completed his training and bought the “Drogerie J. Staesz jun., med. und techn. Drogen, Farben und Lacke en gros und en detail” (Chemist J. Staesz Junior, medical and technical drugs, colours and varnishes, wholesale and retail), established 1880 by Jacob Staesz. There he developed “May’s good idea,” as the family still refers to the trademarked Staesz pfefferkuchen spices today. On the 75th anniversary of the company, Robert May reminisced that “it was the old custom of country people […] to buy their spices by weight at May’s Chemist. Weighing out the spices was very laborious, so Mrs May came up with the idea of packing up the spices in the desired amounts [after closing] and having them ready for the following day. Her husband […] recognized the significance of this idea, and that is how the branded product ‘May’s good idea’ came into being.”1
Helene May, ca. 1940. Free access - no reuse
Helene May, ca. 1940. Free access - no reuse
Robert May, ca. 1940. Free access - no reuse
Robert May, ca. 1940. Free access - no reuse
Text
Evidently it was customary in rural areas to bake one’s own pfefferkuchen. City dwellers, particularly in the larger cities, preferred instead to buy the finished product. Craftsmen, day labourers and occasional labourers probably could not afford such a special spice blend, and so these treats were provided by landed estates. Here the baking of lebkuchen in the run-up to Christmas was an intensive activity. Hedwig von Lölhöffel describes it:


“Crowds of children came from the manors and the outlying farms to help distribute presents at Christmas. Many large bowls of dough had to be prepared. Already in October they would be placed in warm rooms to rise, and the contents of the dough that rose and expanded, full of life, came almost entirely [from the manor].”


“The winners then had to disclose their recipes. These were reviewed, compared, and expertly standardized. It became apparent that eight spices had been used the most. […] On the basis of this information, Robert May then produced a recipe booklet with baking instructions…This little recipe booklet was subsequently included with every packet of spices.”2

What was new about Staesz’s gingerbread spices?
Text
One of the special features of the Staesz pfefferkuchen spices was that the customary amount of each of the eight spices – bitter orange, lemon, cinnamon, cloves, star anise, ginger, nutmeg and cardamom – was individually packaged. Each individual spice was put in a small parchment sachet in order to preserve its aroma, and the sachets were then packaged up with the recipe booklet to make the Staesz pfefferkuchen spices.
Robert May demonstrated great entrepreneurial foresight in outsourcing the graphic design of the external packaging to a commercial artist. The artist was tasked with graphically representing the uniqueness of the spice mixture (a single packet containing small quantities of eight different spices, all individually packaged) as a special business concept. He chose the stylized figure of a baker holding a double oven glove with the words “May’s guter Gedanke” (“May’s good idea”), flanked to his left and right by the initials J and S for Jacob Staesz. The artist placed his design inside a circle to create a round emblem.
Ein historischer Beutel Pfefferkuchengewürz der Marke "Staesz-Pfefferkuchengewürz". Free access - no reuse
Ein historischer Beutel Pfefferkuchengewürz der Marke "Staesz-Pfefferkuchengewürz". Free access - no reuse
Text
Robert May knew that, with this evocative and enigmatic image, he had created a trademark that was both unique and instantly recognizable. This was his objective since he was striving to make the greatest advertising impact. The German Patent Office, which was established in 1877, gave him the option of registering and thus protecting the design of the packaging as a whole, with the striking emblem, symbols and writing on the front, and the basic recipe for pfefferkuchen on the back, as a combined word/figurative trademark. We do not know why they decided to use the possessive apostrophe, normally only used in English, for “May’s guter Gedanke” instead of writing “Mays guter Gedanke,” which would be correct in German. In any event, this “incorrect” spelling increased the advertising appeal.
Did Robert and Helene May know that the participation of the Königsberg Housewives’ Association subsequently also led to the spice blend as a whole being included in the next editions of the well-known Doennig cookbook? This was the ultimate accolade for the Mays’ idea and one of the reasons behind its economic success. The cookbook was compiled in 1891 by the sisters Margarete and Elisabeth Doennig from traditional regional recipes. Initially self-published, the renowned 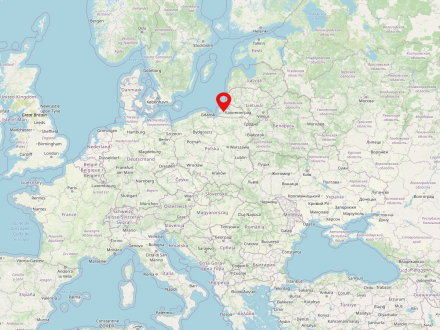 Kaliningrad is a city in today's Russia. It is located in the Kaliningrad oblast, a Russian exclave between Lithuania and Poland. Kaliningrad, formerly Königsberg, belonged to Prussia for several centuries and was the northeasternmost major city.

Kaliningrad in the Online Encyclopedia of the Culture and History of the Germans in Eastern Europe (German)Kaliningrad at Google Maps
-based publisher Gräfe und Unzer took over publication of the cookbook in 1900.
After this, regional variations to the published pfefferkuchen recipes gradually became less important. Eight sachets sold as a single packet inspired confidence, but also allowed the cook to try other recipes by omitting one or more of the sachets. The eight individual Staesz pfefferkuchen spices, 20g in total, were as follows:
Text
Text
Sales grew rapidly. Günter Preuschoff, editor of the “Elbląg News”, reproduced Robert May’s reminiscences in 1954:
Text


“In the first year, we sold just 1,000 packets of pfefferkuchen spices [...] In the third year it was 10,000 and in the fifth year more than 70,000 packets, the contents of which found their way into the pfefferkuchen of families in the local area and beyond. A few years later, May’s pfefferkuchen spices were known throughout East and West Prussia, throughout Pomerania all the way to Berlin, and when, in late summer, the aroma of Staesz’s pfefferkuchen spices wafted along Wasser- and Schifferstraße as far as Elbląg Old Market, then the inhabitants of Elbląg would know that Christmas was just around the corner: the season had started.”3 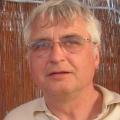